cogean? exhibitions have been written up in the Seattle Times, City Arts, the Stranger, Kitsap Sun, and featured on ArtZone. Links are provided below. 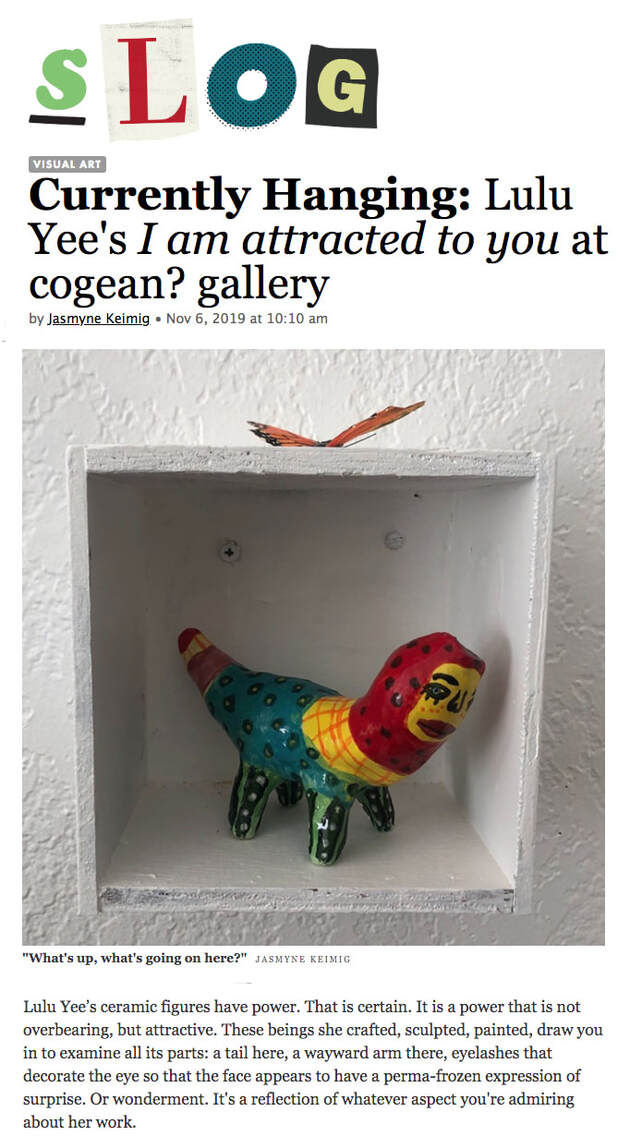 the Stranger, Currently Hanging: Lulu Yee's I am attracted to you at cogean? gallery
by Jasmyne Keimig, November 16, 2019
Lulu Yee’s ceramic figures have power. That is certain. It is a power that is not overbearing, but attractive. These beings she crafted, sculpted, painted, draw you in to examine all its parts: a tail here, a wayward arm there, eyelashes that decorate the eye so that the face appears to have a perma-frozen expression of surprise. Or wonderment. It's a reflection of whatever aspect you're admiring about her work.

The figures are all a part of her show I am attracted to you at cogean? gallery in Bremerton, which is located in the home of artist power couple Joey Veltkamp and Ben Gannon. Bushwick-based Yee's exhibition represents the end of the experimental gallery's two-year run which began in 2018 with Erin Frost's traces / you know the way. Yee's exuberantly bright and curious gnome figures are a fantastic note for the gallery to end on." 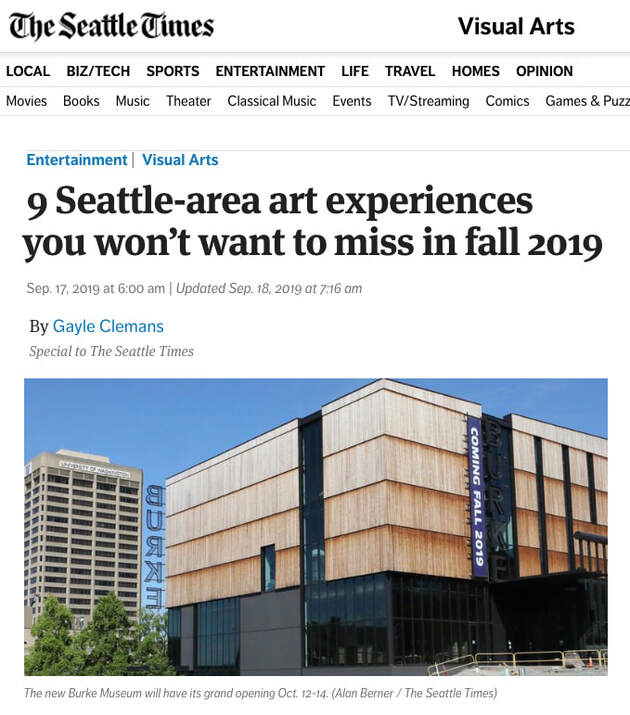 The Seattle Times, "9 Seattle-area art experiences you won't want to miss in fall 2019."
by Gayle Clemans, September 17, 2019
"One o­f my favorite ways of thinking about the term “aesthetic” (before it became shorthand for cool Tumblr collages) is that it contrasts with “anesthetic.” Art quickens our sensations and enlivens our spirits.
Here are some great possibilities for local encounters of the aesthetic kind:
​
If you haven’t taken the ferry to Bremerton lately, this fall is a great time to make the trip. Just a short walk from the Bremerton ferry dock, a charming old house doubles as cogean?, an experimental art space. Homeowners Ben Gannon and Joey Veltkamp are concluding their two-year project of hosting exhibitions with an energetic package of events and ceramics (vibrantly colored, gnomelike creatures) from Brooklyn-based artist Lulu Yee. Nov. 1-Dec. 15; 833 Cogean Ave., Bremerton; free; cogean.weebly.com"

​
the Stranger, "Currently Hanging: "Ingress" by Dawn Okoro
by Jasmyne Keimig, July 30, 2019
"When I arrived at cogean? gallery on Sunday afternoon, a bowl of bright, purple-y red plums glowing in the sun greeted me. People were scattered on the front lawn of the gallery, slurping ice cold drinks and eating BBQ'd meats and savory noodles. The grass was dry and the sun hot.
​
Bremerton is quiet compared to Capitol Hill—the wind moves differently around its streets. People had gathered at cogean? to celebrate the opening of Austin-based artist Dawn Okoro's latest show at the space, Punk Noir. This exhibition featured portraits by Okoro of black musicians, filmmakers, photographers and other creatives and consisted of mostly new work made especially for the gallery. The walls of which had been painted different, creamy pastel colors." 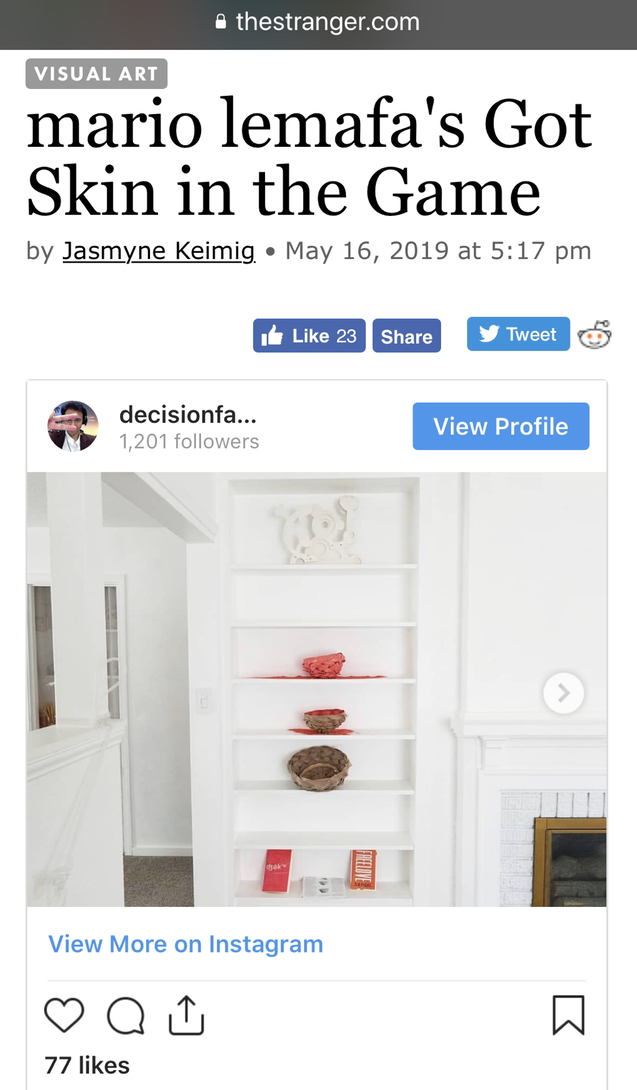 the Stranger, mario lemafa’s Got Skin in the Gsme
by Jasmybe Keimig, May 16th, 2019
“At the home gallery run by Joey Veltkamp and Ben Gannon, lemafa's show considers "pan-indigenousness, the frictions as well as the unions involved in relation, from one 'indigenous' person to another." It touches on various forms of communication and connection—from a painted internet router to a series of baskets that are a result of a weaving talk-story sesh—parsing out what it means to recognize, care, and call on other people.”
A domestic partnership steeped in art / Nancy Guppy
produced by David Albright for ArtZone, March 22, 2019 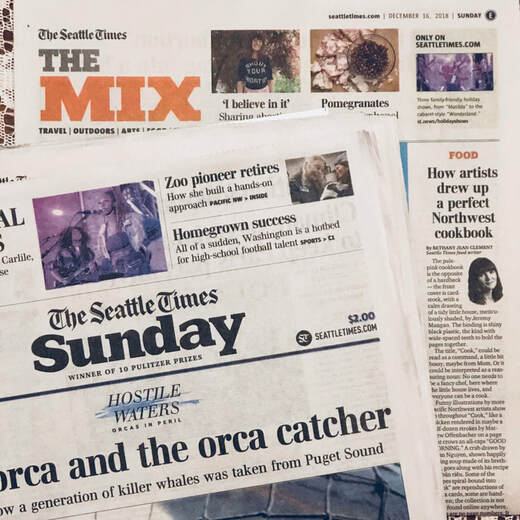 The Seattle Times / How artists drew up a perfect Northwest cookbook
by Betheny Jean Clement, December 12, 2018
The community represented here is a loose-knit one of artists, gallerists, curators, food-industry types, friends. Ito put “Cook” together as a show at the Bremerton gallery known as cogean? (their question mark), located inside the little house depicted on the cover, owned by artists Ben Gannon and Joey Veltkamp. The cookbook “Cook” is making its way into the contributors’ and other hands by way of both events at the gallery and the cogean? website.
​
Gannon and Veltkamp say that some curious visitors have shown up at “Cook” potlucks at the gallery and been mystified: Where is the art? The walls are blank; holiday lights twinkle on a tree in the customary, cozy way. At the events, Gannon points out with a smile like a devilish elf, “You are the art” — along with dishes from the book, maybe live music and hot buttered rum, and conversations about art or politics or how deep a bathtub should optimally be. And “Cook,” the book, is the art, too, meant to live on, continuing to feed people. 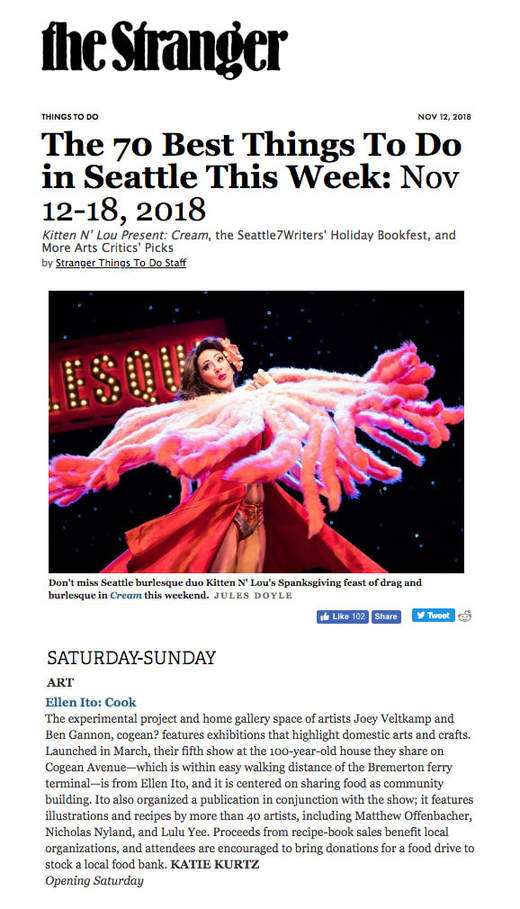 The Stranger / The Best Art Shows in Seattle: Winter 2018/2019
​by Katie Kurtz, December 5th, 2018
The experimental project and home gallery space of artists Joey Veltkamp and Ben Gannon, cogean? features exhibitions that highlight domestic arts and crafts. Launched in March, their fifth show at the 100-year-old house they share on Cogean Avenue—which is within easy walking distance of the Bremerton ferry terminal—is from Ellen Ito, and it is centered on sharing food as community building. Ito also organized a publication in conjunction with the show; it features illustrations and recipes by more than 40 artists, including Matthew Offenbacher, Nicholas Nyland, and Lulu Yee. Proceeds from recipe-book sales benefit local organizations, and attendees are encouraged to bring donations for a food drive to stock a local food bank. 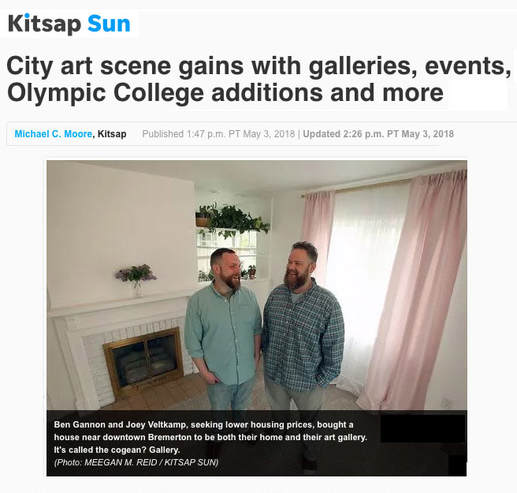 Kitsap Sun / City arts scene gains with galleries...
​by Michael C. Moore, May 3rd, 2018
Joey Veltkamp and Ben Gannon see it from the front rooms of the house a stone's throw from downtown they recently acquired to serve as both home and gallery.

"There's a sense of possibility here that we found really compelling," said Gannon, who relocated from Seattle with his partner, Veltkamp, to open cogean? Gallery at the edge of the downtown area.

"We just felt like Bremerton is doing its own thing," said Veltkamp. "Bremerton's always been known as a place that embraced the arts. Ben and I are both from smaller towns — he's from Snohomish, I'm from Spokane — and we like that smaller-town quality. 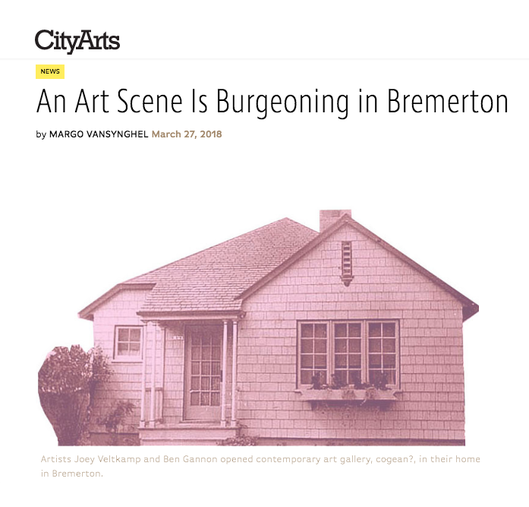 City Arts / An Art Scene is Burgeoning in Bremerton
by Margo Vansynghel, March 27, 2018
“I’ve seen orcas. Twice!” Joey Veltkamp enthuses about the ferry ride between Bremerton and Seattle. As he talks, his arm nearly brushes a large pink quilt that reads “WE’RE ALL GONNA DIE”—the centerpiece of his solo show, Blue Skies Forever, opening tonight here in Seattle at Greg Kucera Gallery. After the evening’s lively opening reception, Veltkamp and his husband, artist Ben Gannon, will take the ferry back to Bremerton, where they moved last August.

A growing group of Seattle artists is moving across the Sound to the blue-collar navy town of a little over 40,000 people, lured by lower home prices, ample studio space and idyllic ferry rides. A fast ferry has accelerated both the trend and the trip from Seattle.
​
Things are changing in Bremerton. Olympic College opened a new, state-of-the-art gallery in late January. Last month, the 77-year-old Roxy movie theater reopened after being mostly closed for 30 years, and Veltkamp and Gannon inaugurated their contemporary art gallery, called cogean?. 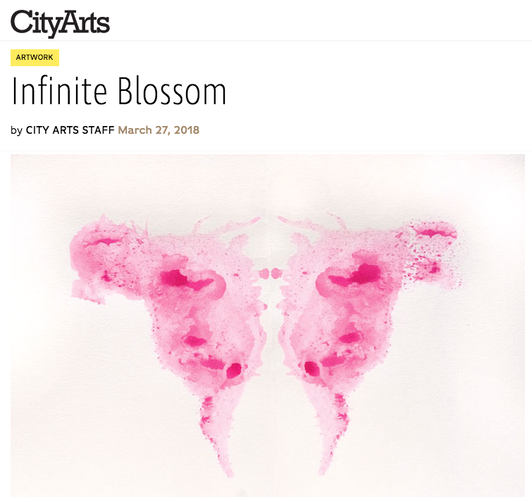 Erin Frost’s recent multimedia works comprise a volume of autobiographical imagery. A series of Rorschach-inspired prints were made by drawing trails of deep fuchsia paint along the heart line of Frost’s palm—a process filmed for the centerpiece video in her exhibit traces / you know the way.

“The piece is responding to relationships,” Frost says. “It’s about the imprints we leave behind, as well as how we’re imprinted upon and expand.

The video carries this theme of mirroring, reflecting back to ourselves the way, perhaps, a lover would. It’s about learning to conjure and fill that intimate space. I’m thinking about the body as a map of the past and future, and ultimately as a love story.”

​traces / you know the way is on view at cogean? in Bremerton on Saturdays through April 13, with a finissage punch party on closing night.
Bremerton Beat Blast / Kitsap Sun
by Josh Farley, February 27, 2018 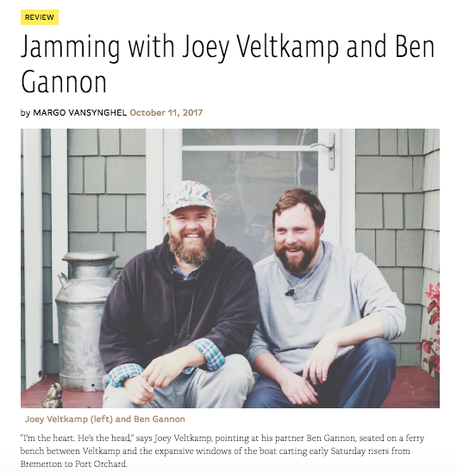 City Arts / Jamming with Joey and Ben
by Margo Vansynghel, October 11, 2017
Other tactics include increasingly merging life and art, engaging with Bremerton as a creative endeavor, and transforming their Bremerton house into their own home gallery [cogean?] and artist refuge (plans are still in flux but include showing work by Seattle and Bremerton makers and an opt-in residency for those who need it). All of it fuses into festiveness, togetherness, community-building and beauty particular to Veltkamp and Gannon’s holistic aesthetic—a true Gesamtkunstwerk.
​
“We want to live a beautiful life, aesthetically and ethically,” says Gannon. “We’ll incorporate another practice so that ideally, every detail, from rising to sleep, engages in deliberate acts of beauty. That’s a good enough goal for life, we think.”