February, 2018
cogean?: The process is so different for all of us--how do you get into a good space to develop new work?

Erin Frost: So much of the most meaningful work I've created has started from a deficit that works it's way to a place of abundance. I think a lot of the most difficult feelings really call for attention in ways that ask us to contemplate and investigate. Once we give in to that and start creating from a vulnerable and honest interior, the act of making art is a way of healing and sprouting new growth. Because I work very intuitively and have to transmit whatever it is I'm feeling, it seems that once I'm at the heart of the matter the space tends to create itself and things start unfolding. It feels like the more honest I get the more abundance of creativity there is. That, and there has to be room for play, to get weird, for compulsion, to make mistakes, and to channel heightened energies.

c?: We think of your work as a form of generosity. Specifically, the vulnerability of sharing your interior space with the public. Are vulnerability and bravery connected?

EF: Thank you, that is such a beautiful compliment! Especially coming from two of the most generous people I know. Yes, vulnerability and bravery are infinitely connected. We all have moments in which we choose to open or close, and life is so much about letting go. The dark and light are forever intermingling. So do you choose to remain open in the face of knowing that? If we choose to remain open and be seen and tell our stores, we are choosing a brave vulnerability. And we see and connect to those around us who are also courageous. I think we need this now more than ever; to find the ways we connect. To see that vulnerability in others gives us the courage to share that part of ourselves even more so. We have to reveal ourselves for true connection.
​
c?: For this exhibition, you experimented by making site-specific work, which is unusual for you. How was that experience?

EF: Creating site specific work at cogean? was a lovely experience, it's such a beautiful welcoming space. I'm very interested in the idea of letting the work inhabit the space it was made for and in. Initially I wasn't sure if working outside of my space would feel unfamiliar, because it is so much a part of my process, but it felt like the perfect combining of our environments, which seems quite intimate and pertinent to the work I made. It really plays into my interest with this show, which is this joining together, and the ways we reflect each other. I'm grateful for this shared space and energy!

c?: Things have changed so much in the region during the past five years. What do you miss about old Seattle? And what do you love about new Seattle?

EF: People have moved away, our spaces have changed, I miss what we took for granted. That said, what I love about Seattle now is that the tender voices seem more important than ever. And I love that there are spaces, such as yours, that give platform to that.

c?: Art has many forms and stages; which part of the cycle feeds you the most?

EF: I love that feeling once you move through the uncertainty and something just clicks. It becomes like breathing, you start creating almost without thought, yet it's really of the utmost intent. It feels like channeling the truest parts of yourself and everything else falls away, like finding your true center. I also love getting to share the outcome of that process. I'm trying to be more present in those moments. Being able to make something that people connect to, especially if it's something very personal, is pretty amazing.

EF: I agree that we could all use more tenderness, creative and otherwise. Compassion, empathy, connection. More love, always more love!

c?: If this show had a soundtrack, what would it be?

EF: I love this question! I was going to say 'Ladyfingers'  by Herb Alpert because these mitts are all over it, haha. But this show is really a love song, with all the aches and triumphs: [click here for Spotify playlist]

Living with Erin Frost's traces / you know the way 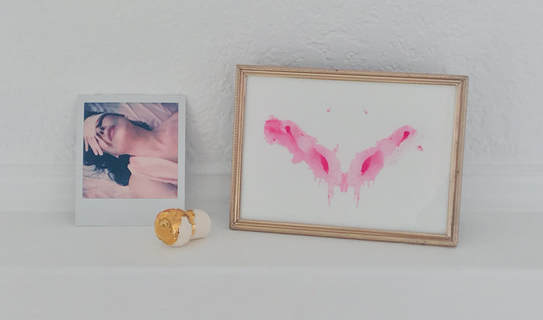 ​It's Sunday, April 1st and spring is upon us. The sprawling branches of the magnolia tree in our back yard are covered in an extravaganza of white and pink flowers. The weeping birch tree in the front yard is shaggy with its pollen packed threads. Both trees show off their spring looks in the sunny wind, dancing as they do in their bobbing and whooshing way. The house smells of roasted garlic and the saijo persimmon candle burning on the mantle. A guest is currently with us, recuperating in the bedroom downstairs. In the front rooms of our home, where cogean? resides, a techno-magical ritual is underway: Erin Frost’s installation is miraculously generating an in-between space - neither our home in Bremerton nor Erin's apartment studio in Seattle, but one that combines them and connects them across time and space through objects of memory.

​The central and title work of the show, traces/you know the way, is a video playing on a large screen television in front of the living room windows, framed by our light pink curtains. Those curtains and that window appear in the video, as well as their facsimiles created in Erin's studio. In front of these backdrops she performs while collapsing the 20 mile distance between these two spaces. The footage jumps variously from holding pink roses, cellophane wrap, or clutching the fabric of the curtains of the pink slip she wears. The slip from the film is also physically present in the space, hanging over the mantle echoing the femininity of the curtains. The room, in fact, is full of objects involved in or created during the generation of the film. In one vivid vignette from the film Erin uses one finger to pull red paint across the heart line of her hand lead to a series of Rorschach images framed in gold frames and hanged on the wall to the left of the front room windows where the film is playing, taking on forms of hearts, fairies and butterflies. And more: on the bookcase to the left of the fireplace is a series of still images, Polaroids, all of their images distinctly birthed from the film. On the lowest shelf, below all the photos, is a pink rose painted in gold - the same rose as the one being painted in the video.
​
In the room to the south of the living room, what would be our dining room, another film plays, much more simple than the one in the main room but no less hypnotic and alluring. In it there are roses arranged against mirrors with all their blooms pointing inward. One of the flowers is pulled back and then pushed forward, creating a miraculous floral heartbeat for the space as it move in and out ad infinitum, the simply magic of mirrors dazzling like glass cut to refract light. A virtuosic video particularly considering it seems digitally manipulated but is in fact just brilliantly composed.

On a gold stand in the corner of the main room is a stack of cards with the text “retrace the outline/drawing stronger still/your tenderness” printed into one side, backward, and embossed, near-invisibly, on the other half.

Most of the works braided in to the installation were created out of the fusion of our space and her own home studio. However, there are objects from her home and artworks not made specifically with this show in mind incorporated seamlessly as a balance to the nature of our ownership of the space. A shelf of ceramic champagne corks, dripping with gold luster, the stand displaying the cards, a small vessel containing gilded flower petals.

In a strange way the two video works playing endlessly in the space, sometimes for the specific purpose of the gallery and sometimes for us to have playing, inhabiting our rooms, can be connected through contrast to films like Paranormal Activity and The Ring. In all the ways that the technology of those films reveals the horror of the existence, so to does Erin use these technologies to cast messages of love, warmth hope, strength, courage and vulnerability into the world.

And in taking these video works together along with the objects arranged around them in the space, the overall effect is in part Lynchian.  We sometimes refer to the gallery space as The Pink Room, as though it were one of the extra-dimensional spaces visited in the Twin Peaks series. In its familiarity and also its strangeness, there is both safety and risk. This miraculous space that Erin’s distinct attention to subtlety and her ability to combine contradictory phenomena into cohesive expression has created, is, most definitively, a nexus for the exhilarating paradox of love.
Exhibition-related press 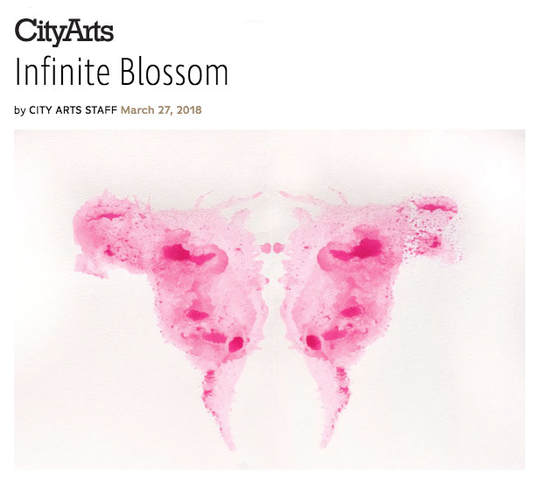 Infinite Blossom / City Arts Magazine
City Arts Staff, March 27, 2018
Erin Frost’s recent multimedia works comprise a volume of autobiographical imagery. A series of Rorschach-inspired prints were made by drawing trails of deep fuchsia paint along the heart line of Frost’s palm—a process filmed for the centerpiece video in her exhibit traces / you know the way.

“The piece is responding to relationships,” Frost says. “It’s about the imprints we leave behind, as well as how we’re imprinted upon and expand. The video carries this theme of mirroring, reflecting back to ourselves the way, perhaps, a lover would. It’s about learning to conjure and fill that intimate space. I’m thinking about the body as a map of the past and future, and ultimately as a love story.”
​
traces / you know the way is on view at cogean? in Bremerton on Saturdays through April 13, with a finissage punch party on closing night.
Bremerton Beat Blast / Kitsap Sun
Josh Farley, February 27, 2018

Kitsap Sun reporter Josh Farley stopped by cogean? to get a sneak peek at Erin Frost's show, 'traces / you know the way'.