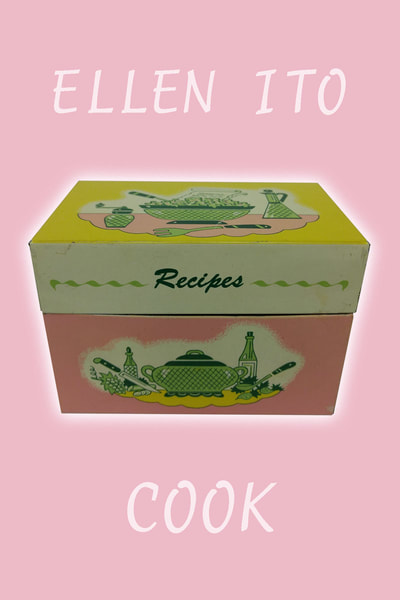 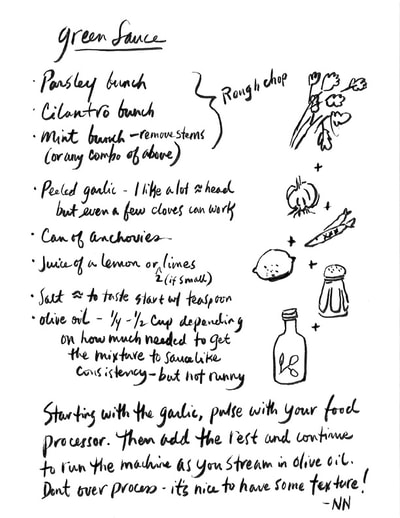 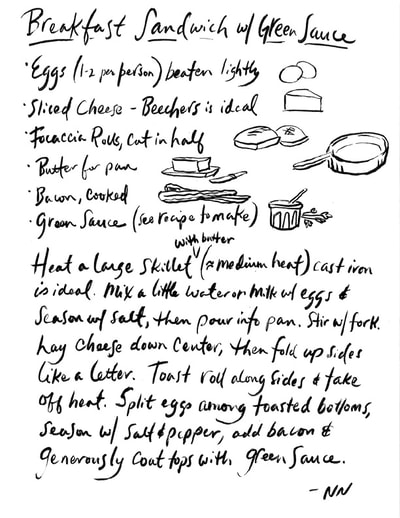 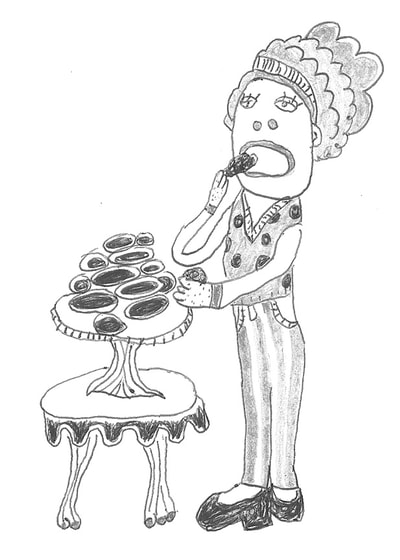 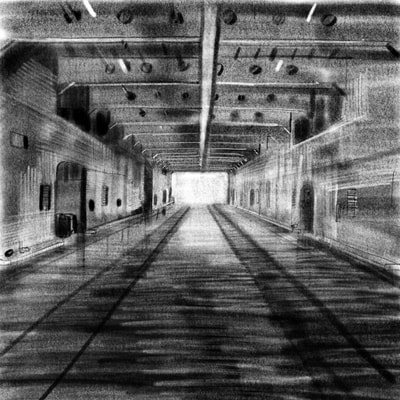 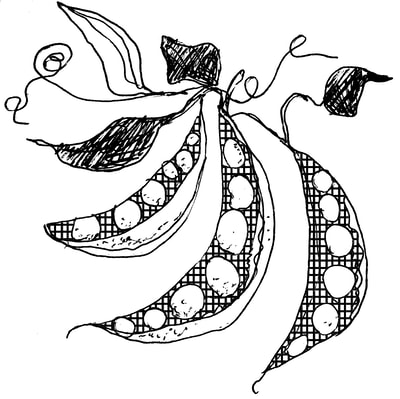 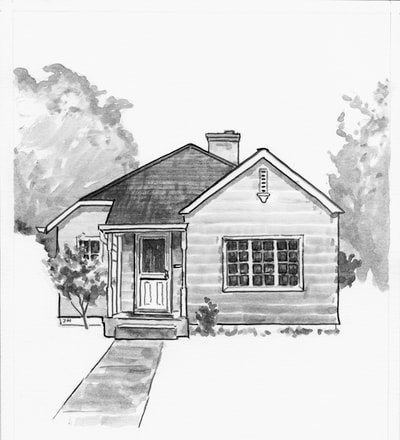 October, 2018
​
cogean?:  Cook is a beautifully layered exhibition. What was your starting point? And how did it evolve along the way?

Ellen Ito: I had been musing for a while on my lifelong, hardcore love of autumn and winter, and batting around ideas that played on the pervasive ambivalence people hold for this time of year. This process included a lot of discussions where people told me they seriously hated darkness, enjoyed wearing sweaters and adored/dreaded time spent with family. In short order, Seasonal Affection Disorder grew into something I realized would be better to capture and wrestle into submission for a future project. What lingered was the realization that so many of those conversations had centered around food based experiences and memories--second only to people hating on the darkness! If there was one thing that people weren't seasonally ambivalent about, it was the meaning and impact of food. This served to form the basis of Cook.

c?: Cook is also a cookbook masquerading as a fundraiser. That’s such a beautiful way of turning it inside out for reflection. We love the questions you’re asking indirectly (and directly); “what can art do?” “What should art do?” “What comforts in the darkest days of the year?” “Why is food so potent?” How did you come up with the idea of a community fundraiser?

EI:  The idea of using the Cook Book as a tool for fundraising is really just borne out of the initial source material for the project; Semi-D.I.Y. community fundraising cookbooks. Church cookbooks, P.T.A. cookbooks, the Junior League, Seattle Chinese Drill Team. Loosely formatted recipes, personal notes, hand drawn illustrations, often typewritten or mimeographed. In turn they are familial, pragmatic, communal and resolute. The less polished and formal, the more I love them. And this publication is an unequivocal homage.

c?:  There’s another element to Cook that is so tender. You are offering to cook these recipes that the community has provided to people who reach out to you during the show? Is there a set format to that? Do you have any hopes/expectations from the exchange?

EI:  I appreciate the characterization of this part of Cook as tender! As I was thinking about the work, the larger question was:

How could I, as an avowed non-writer, more fully express the broader ideas of the show? The clearest path seemed to be to use the Cook Book as de facto guidebook to help me tease those elements out a little further.  What better way to connect and commune than through the actual act of making and sharing? So I am asking people in the area if they will cook and eat recipes from the Cook book with me. I will come to your home or wherever you want to cook. Initially, I am offering up Mondays during the run of the exhibition. If people have an idea about what course they would like to make, I can share the related recipes in the cookbook and they can pick, or folks can browse. Hopes and expectations? I hope people will have an interest in cooking and eating with me, my expectation is that some folks will suspect I might be a murderer trying to beguile my way into their homes and businesses. I am neither that clever, nor that bloodthirsty! Or am I? Only one way to find out, everybody. Think tender.

c?:  What’s your favorite thing about the NW artistic community?

EI:  Every page of the Cook Book is a testament to people's generosity and support within the community! But my favorite thing right now is the amazing art, programming, and other work that is happening, in spite of, or perhaps, because of, the challenging time we find ourselves occupying. yəhaw̓, Bellwether, While Supplies Last, Outer Space... so many things!

c?:  What could the world use more of right now?

EI:  We can always do with more kindness and empathy.

EI:  Hoping to spend a lot more time in my new studio space, (Seasonal Affection Disorder, perhaps?) and to get SLIP (program space in Tacoma) up and running with a full schedule. 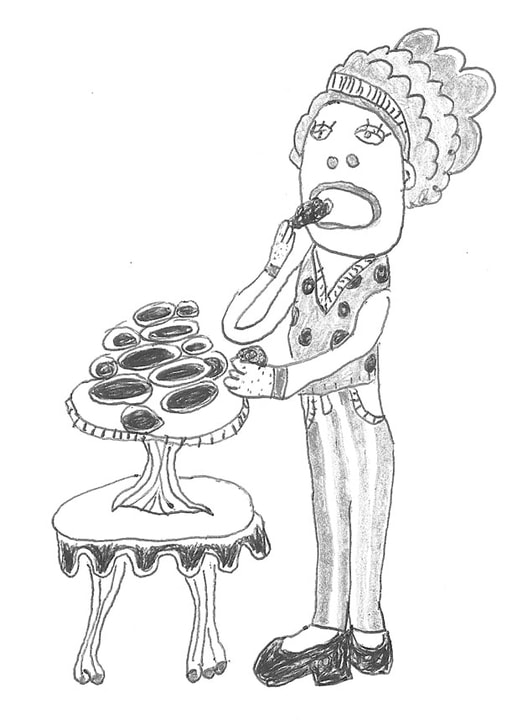 "Eating cakes" by Lulu Yee
​The gallery space is pristinely empty. As quickly (and early) as our winter decorations went up this year, so too did they come swiftly down. The emptiness has the refreshing quality of a New Year’s Day polar bear plunge; shocking to a system used to the warmth of winter interiors. Bracing, thrilling, and good for the system and circulation. But also painful. All the more so this new year after this particular winter holiday season, not because of the decorations themselves being put away, but because of the celebrations of love, community and personal history that they were mere dressing to, thanks to Ellen Ito’s show COOK.

The object created for the show was a community cookbook sold to raise funds for local charities. The recipes, stories and illustrations were gathered from some members of the creative community connected to Ellen and cogean?, bound together with black plastic tooth binding, its cover the same light pink as the drapery in the gallery rooms and with Jeremy Mangan’s illustration of our home.

The object itself is exquisite and precisely what it ought to be. It is a portrait of all of us who were involved and contributed, using a form from our collective near past, invigorated with the truth of who we turned out to be and are right now. Misfits at church or temple, school or community club, we have found our new place, and a network of love and care that deserves its own documentation. And not only that, as a community we have a responsibility to share that care with others.

But the object itself was only one piece of the greater work of the show. Family and community recipes are more than instructions for the preparation of food. Combined with their stories, making and eating these recipes constitute the ritual engagement with the networks that bind us through time, space and memory and grant us an experience of the immortal. And rituals are meant to be performed, spells in a grimoire must be cast to work. Through the course of the show Ellen went to people’s homes and cooked meals from the book for them. And for the events of the show the food we served was drawn from the book. And in an age of cooking generally involving smashing together a variety of recipes pulled up online, the recipes from this book focus on just their own small, personal lineages of cooking, strengthened by the rootedness. And to forge connections with others at this depth is miraculous. To learn from Matt Offenbacher’s mother that sunflower seeds are a brilliant addition to lasagne, from Gretchen Bennett that romesco sauce makes roasted vegetables incredible, or from Ellen’s mother that the best fried rice is made with bacon. Through this we are all closer. And to know that these recipes and illustrations are then also being read and performed by those who purchased the book casts an even broader net and creates latent connections waiting to be brought in to the light of a dinner table or party where the food is suddenly so recognizable.

Working in our little domestic, community-cookbook way to help strengthen and expand our community was at the core of why  we chose to start cogean? in the first place, and our last year has been abundant in the magic of connection. The gallery space is empty now and for a few more weeks, and we are so ready for another year of forging community, aspiring to do so in a way that comes at least close to the elegance of COOK. 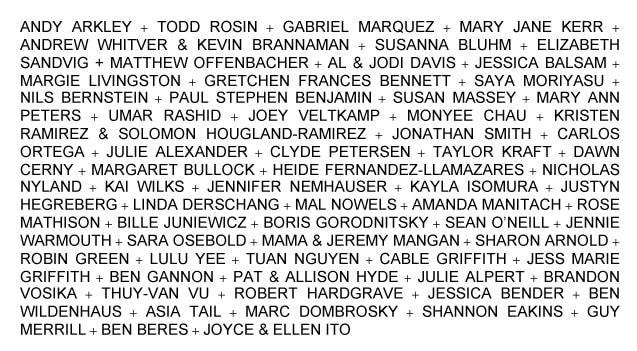 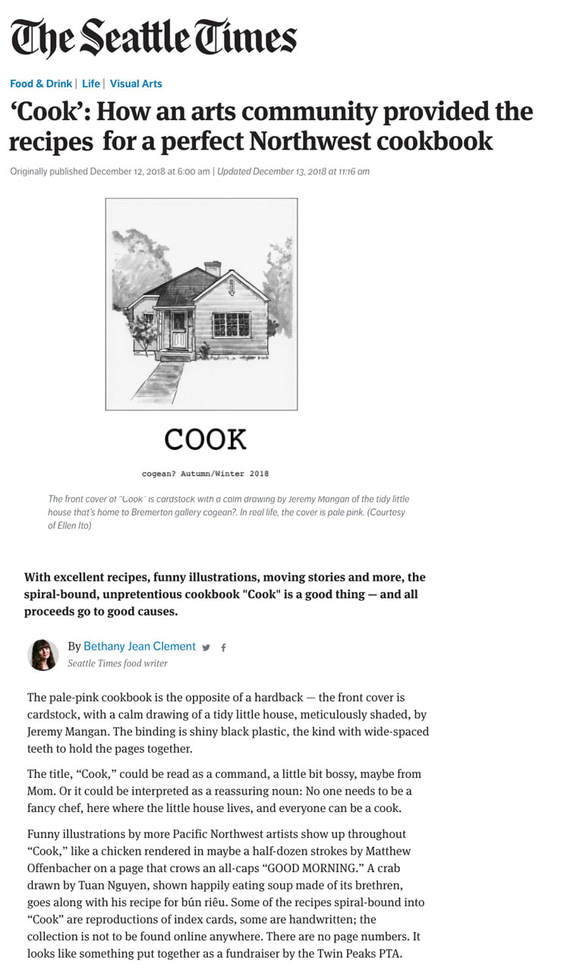